THE AVOCADO
Agriculture
Production Guide
Comments Off on THE AVOCADO 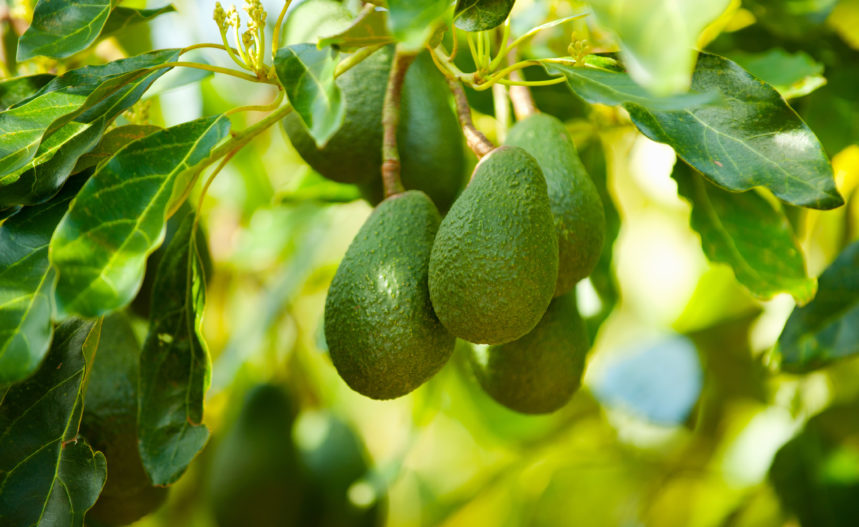 The avocado tree can be found scattered island wide in St. Kitts and Nevis. The single solid stand of the crop is at the Wingfeild Estate. The trees are mainly seedlings and or the Pollock Simmonds and Lula varieties. In general the bearing season is between July and October. In this period (July-October) the crop has to be marketed locally.

1:1. The avocado pear is a member of the family Lauraceae. The genus is Persea and species Americana. It has been reported that there may be about fifty species in the genus Persea a considerable number of which like the avocado, are native to Mexico and Central America.  Only the species Americana is commercially planted.

1:2. The fruit is used fresh and in salads, and is well known and favoured in the Caribbean. The fine oils which the fruit provides are used in the cosmetic industry where it is made into facial creams, shampoos and hair conditioners. The finished products attract some of the higher prices. Technology has been developed in some countries to process and can pure avocado and whole pieces.

1:3. There has been within recent times an increasing demand for fresh fruit in international markets. For the O.E.C.S. countries the normal season is between July to September. Outside of these production months March to June is considered early, while October to February is consider late. Guidelines for exporters of avocadoes, mangoes, pineapples, papayas and passion fruit to the UK market- the brochure prepared by the Commonwealth Secretariat Export Market Development Division on page 22 under the heading when to sell, provides the information under Timing “The market is supplied throughout the year by the major suppliers”.

1.3 In the Caribbean many selected cultivars have been introduced from other avocado growing areas around the world; but there are literally several thousand seedlings scattered and growing. Only very limited selections have been carried out on this vast resource. A research effort in this activity suggests itself.

The avocado flower is entomophilous, bees been the principles pollinating agent as evidenced by their large numbers and droning sounds once the tree blossoms. The avocado flower exhibits a synchronous dichogamy with two distinct cycles.

In the first flower opening the female organ (stigma) matures (protogynous) and is ready to receive the pollen but the stamen are not ready to shed them. In the second opening the flower performs as male (Protandrous) and pollen is shed from the stamen- the stigma is non receptive at this time. This phenomenon is described as obligatory cross pollination and is a constraint for self-pollination. It is normally not restricted to the same flower but to the entire tree, and in most cases to all trees within the same cultivar. Cultivars are grouped into two distinct types A and B according to the performance of their flower.

Group A – Flowers of the plants in this group open first in the morning as female and close by midday. They open again in the afternoon of the following day but as male. The cycle takes 36 hours – from midday day one to afternoon. It should be noted in the same day and on the same tree many flowers are protogynous, while others will be opening in the afternoon (Protandrous).

Figure 1      Performance of the Avocado Flower

The fruit is a berry with a single seed. As has already been mentioned it varies in size. There are four fruit shapes (a) Elongated (b) Pear (c) Round (d) Oblong, the shape more or less conforming to seed shape. The fruit is attached to the tree by a long peduncle which depending on the point of attachment is classified as either symmetrical or asymmetrical. The peel (exocarp or skin) presents a wide variation and can on the ripened fruit be light green and purple. The seed is covered by two thin usually papery and light brown layers that contain variable amounts of inhibitors to germination. It is recommended that these layers be peeled off or a slice be removed at the distal end before planting to accelerate the process of germination. When fruits are mature seeds are either close in the cavity or loose. In those cultivars where the seed is loose a light shaking of the fruit is used to determine fruit maturity. For long journeys the loose seed is an undesirable feature as it could lead to poor quality fruit at journeys end.

Location – where is it growing and the existing conditions and if it is a single tree or one of several.

Type of Growth – Upright or Spreading

Age – the approximate age should be ascertained if possible

Health and Vigour – Does it appear healthy? Is the growth vigorous?

Flower Type – Group A or B

Race – Hybrid, West Indian, Guatemalan or Mexican (this may need the assistance of a specialists.

Shape – elongated, pyriform, round or oblong

Weight – in grams (Mean of several)

It is advisable that one be kept in which the above should be noted in detail, Pictures should be included to provide visual data.

Avocado scab is caused by the fungus Elsino persea. Some varieties appear to be resistant/tolerate to the disease. A reduction of humidity and aeration of the tree by pruning and allowing light into the canopy will assist in controlling the disease. In the cases of stem rot and anthracnose a spray programme with a copper fungicide (where this is feasible) or the use of post-harvest treatments including storage controls of temperature and humidity. Post-harvest dips are also useful. (Benomyl Imazil, Thiabenzaole).

5.1 The avocado can be propagated sexually, or asexually by cuttings. By far the most widely used for commercial production is asexually where a chosen seed is grown as a rootstock and a graft or bud is put on as the scion.

5.2 In avocado propagation because the tree is so susceptible to the disease P. cinnamomi special care must be applied at the nursery.

Fruit for stock should come from vigorous healthy trees. Seeds should, where possible receive hot water treatment by the immersion in hot water at 52 degrees C for 10-15 minutes.

The seeds are then sliced, and a piece removed at the distal end with a disinfected knife (Dipped in alcohol).

Potting bags where used should be of the right colour (black preferred) thickness 300 mm gauge and sized 6 by 14 inches.

A shade house is required in which 40 – 55% of the incident light is excluded. Seeds after sowing germinate in 12-15 days. Depending on the nutrient status of the soil etc they grow vigorously and are ready grafting 12 – 14 days later or when the seedling is changing from red to green.

The favoured method of grafting is the use of a terminal wedge graft. The scion should be yellow on top and green on the bottom, and should be collected only from healthy trees of the named variety. Scions should be taken which match approximately the diameter of the stock. The scion once removed from the parent plant should be placed in a clean piece of muslin cloth previously dampened. Scions should be wrapped in this damp muslin when being taken to the nursery. Scion should best be collected early in the morning.

The principal tool is a clean sharp budding knife. Budding tape (polyethylene), of which there are proprietary brands, should be used.

As mentioned earlier, the top of the seedling is cut off at a given height, the scion is cut into a wedge, the stock is cut vertically downward and the wedge shaped scion inserted between the cut surfaces. The interested scion and stock are then bound tightly. The graft is then completely covered with a suitable sized clear polyethylene bag. The bag is tied loosely around the grafted stock. The covering prevents water entering the cut surface, and allows the grafted plant to be watered normally. In a well-managed nursery the grafted plants are carefully labelled as to cultivar.

As the grafted plant is growing several axillary buds emerge, these should be pinched off. Once the graft is caught (as evidenced by new flush on the scion) the grafting tape should be slackened and retied loosely to allow normal growth and to prevent constriction of the new plant at the union stock and scion.

6.1 Special care should be taken when selecting the soils in which the avocado plants are to be transplanted. These have already been discussed. Planting distance ranges from 25’ x 25’ – 28’ x 28’. Planting holes are generally 18’’ x 18’’ x 18’’. It would be useful to incorporate some well-rotted pen manure which was previously steam sterilized, a compete fertilizer (12:12:17:17) about 2 ozs may be used as a basal dressing. The plant should be carefully removed from the bag. The top soil which was placed in the same manner in which it was removed should be back in the same way, and pressed firmly around the plant.

The plant should be sheltered from the wind by the use of a feed bag or palm frond etc. Plants should be watered as a necessary. In the first 2 – 3 years the plant should receive a little compound fertilizer applied often.

7.1 The tree appears to require little pruning. De-heading to shorten the tree and force more growth (horizontally) in younger branches appears to be necessary in varieties like the Lula. A wound dressing should be put on the cut surface after de-heading.