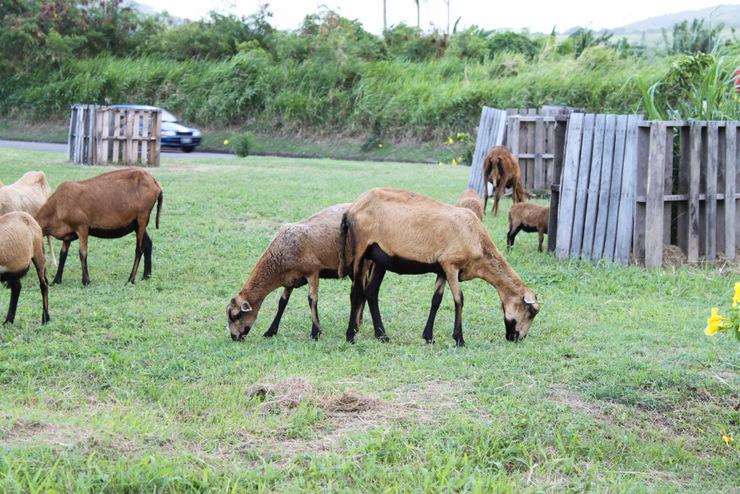 Sheep, like most domestic animals, are susceptible to attack by internal and external parasites. However, internal parasites are more of a problem. Generally, parasites are a major obstacle to developing profitable livestock industries in the tropics. Constant movement of livestock to fresh pastures results in healthier animals since the risk of infectious diseases is reduced. However, with more than four to five animals per acre of land, parasitic control is important.

The tropics are particularly suitable to parasites disease development, since temperature are often ideal for the parasites’ life cycles. In most cases, the parasites can wait for the right moisture conditions to continue their development. These environmental factors, compounded with malnutrition, further contribute to the importance of parasitism.

The major internal parasites of sheep are large stomach worms (Haemonchus); black scour worm (Trichostrongylus); nodular worms (Oesophagostomum); internal threadworm (Strongyloides) and lungworms (Dictyocaulus filarial). All have similar life cycles. The adults live and mate in the gut. The females lay very large numbers of eggs which pass in the sheep’s feces to the pasture. If the temperature is suitable and the ground is moist, the eggs hatch in about two days. The larvae which develop, are then ingested by grazing sheep and the cycle begins again.

Infected sheep appear unthrifty, potbellied, have dry coats and sometimes soft swelling under the jaws. The membrane insides the eyelid is pale and bleached to whiteness. Intestinal worms cause scouring but stomach worms may not do so.

Control is effective if the sheep are well managed. Well-fed sheep do not suffer as much as those that are poorly nourished. Strict rotational grazing effectively reduces infection. However, in the humid tropics where environmental conditions are ideal for the parasites’ survival, deworming is necessary.

A variety of drenches can be used in a deworming programme. The most effective are “broad spectrum” types such as “tetramisole.” Phenothiazine is effective against lungworm. Copper sulphate-nicotone drenches are used effectively against intestinal parasites, such as black scour worms and tapeworms. Deworming preparations are available also in tablet form and injections. The use of these is becoming common in the Caribbean.

Tapeworms are important where stray dogs exist, since dogs are alternative hosts. If the dogs eat infected mutton, they eventually pass the eggs in their feces to the pastures. These in turn are ingested by the sheep and the eggs hatch within the sheep. The embryos enter the bloodstream and later migrate to the central nervous system where they create large cysts or “bladders.”

Infected sheep have impaired vision and balance, and are termed “giddy.” There is no effective treatments of “giddy” sheep, so proper management (deworming sheep regularly and keeping stray dogs off the premises) is necessary for control.

When heavy infestation occurs, the first few infested sheep may die suddenly, while the rest of the flock is dull, weak and listless. The infested sheep may have lock jaw and bleached eye membranes. Liver fluke eggs are passed out in the feces. The eggs hatch in the pastures and the embryos penetrate specific mud snails. The larvae hatch in the snails, leave them and encyst on the pastures where they are eaten by the sheep. The larvae penetrate the intestine and migrate to the liver where they mature within three months. The mature parasites produce eggs and the cycle begins again.

Treatment: Drench the sheep with Carbon Tetrachloride, Hexachlorethane or similar preparation to control liver fluke. Treatment should be repeated four to six weeks later, and a high calcium feed should be given to offset any calcium deficiency in the forage. Pastures or open water may be treated with Copper Sulphate to destroy the snails. Avoid pasturing along irrigating canals or ponds as further precaution.

The common external parasites which affect sheep are: blowflies (including screw worms), sheep keds or ticks, mites, lice and fungi, such as ringworm. They are less harmful than internal parasite, but they still cause immense losses through reduced weight gains, general debility and sometimes death.

Sheep and goats are affected by similar parasites.