TECHNICAL COOPERATION AGREEMENT BETWEEN IICA AND ICDF WILL IMPROVE AGRICULTURE AND RURAL DEVELOPMENT IN ST. KITTS AND NEVIS

Mr. Rawlins and Mr. Shyy expressed this view during the signing ceremony on General Technical Agreement between IICA and ICDF on Tuesday, August 13.

Mr. Rawlins said that this agreement will “reduce hunger and poverty in the Federation and enhance agricultural production and productivity” while Mr. Shyy enhanced his point by saying that the agreement will help in boosting “boosting socio-economic developments”.

In relation to enhancing agricultural production, Mr. Rawlins said that there is the need to fully exploit the untapped potential in the Federation for developing agri-businesses based on local production, processing and marketing, and to utilize “the emerging and evolving role of technology transfer and innovation in developing agri-food systems.”

He went on to say that the ICDF and IICA have enjoyed a longstanding informal relationship with each side pursuing activities such as agro-processing, soil testing, pesticide residue in crops, green house technology and building resilience in the face of climate change.

Mr. Rawlins also listed an example of cooperation between IICA and ICDF. He said that IICA was working on a project to enhance the utilization of mango in the Federation and was provided with a walk-in freezer by ICDF as it was necessary to ensure the success of the project.

He ended by saying that, “This agreement will pave the way for strengthened cooperation and the joint execution of projects which seek to strengthen the capacity of producers and marketers in St. Kitts and Nevis and ultimately contribute to an increased contribution by the agri-food sector to the national economy and rural livelihoods in the Federation.”

The agreement was signed by Mr. Alex Shyy and Mr. Greg Rawlins and witnessed by His Excellency Tom Lee, Ambassador of The Republic of China (Taiwan) and Minister of Agriculture, Honourable Eugene Hamilton. 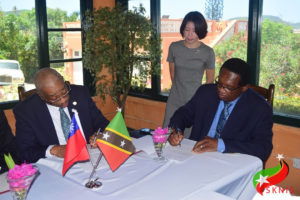